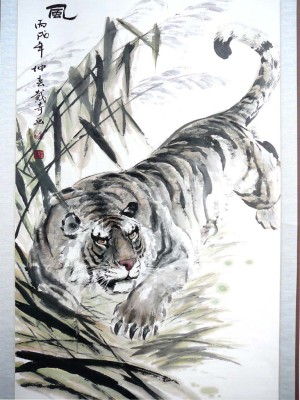 The White Tigers Back fist 白虎背拳

Early in my martial training I was introduced to what  I now like to call the “Bak Fu Bei Kuen” or ,

The White Tigers Back Fist 白虎背拳. The Sinking Dragon or the sinking elbow back fist is a technique that literally pulls your opponent into the back fist with little recourse once initiated. I have been practicing this unique strike since i was personally introduced to it in early 2001 by my Sifu, Alan “Bak Fu” Vasquez, Captain US Army (Retired), Branched Infantry, and Military Intelligence; Viet Nam Combat Veteran, with Recon Ranger, and Special Forces duty, started studies with Yeung Tin Yao, aka Robert “Yeung Biu” Yeung’s Hawaii Wing Chun Association in 1977. After serving his country and being injured in paratroop exercise that would ended his military career and almost took his life, “Bak Fu Sifu” Started teaching Wing Chun Kung Fu in 1979.  The Orange County Wing Chun Association was founded in 1979 and is still located in Lake Forest,  Orange County, California. I myself had met Sifu Bak Fu in 1994, 95 during a time where our daughters attended the same grade school, but started formally training under him in 2001. During the many years of training that followed there were countless times I had seen this “Bak Fu Bei Kuen” flying at me from out of nowhere only to stop an inch off my face. “Use the cats whiskers”, “keep changing”, “move like a dragon”, “be soft” or “be like water” would be the phrases that would usually follow the delivery of the famed strike, but it would years before I would come to terms, get my head around these ideas, and fully understand exactly how to “Use the cats whiskers”, “keep changing”, “move like a dragon”, “be soft” or “be like water”. I was told until learn to use the cat whiskers to stop you will never truly learn how to go. How would do you put this into context to actually teach someone to actually do this? In reality you cannot, it is movement your body must feel many countless times until in is ingrained into muscle memory, and movement becomes instinct and natural action, not re-action. I believe it was not until I had begun teaching that I came to realization and understanding of these and many other terms and ideas I had been taught in the years I spent training with my Sifu, my Kung Fu Brothers and Sisters.

There were times when only Sifu and I were in the Kwoon, he would make tea and I would work. As I hit the Mook Yan Jong or practice Baat Chaam Dou he would tell me story of his training days and of his military days. He would always catch my mistakes no matter how in depth his description of adventure had gotten. On one particular day I remember him telling me of his reoccurring dreams of engaging great Gung Fu warriors in battle, I asked how the dreams ended, he said he had always won. I truly believe he was using the “Bak Fu Bei Kuen” in these magnificent battles, and I know these great warriors were looking at them as I had once long ago.

I have graduate students of my own now and I see them training the younger and newer students. They now are asked the same questions and have to explain these theories and principles as I had taught them, just as I was in turn taught by my Sifu. Time is the best teacher, with time that which is cultivated manifests, and if cultivated, Gung Fu only grows with age.

I now have my own dreams of battle, and you know I will be throwing a few “Bak Fu Bei Kuen” in the mix to ensure my victory.

The dragons are spirits of the waters. “The dragon is a kind of being whose miraculous changes are inscrutable.” In a sense the dragon is the type of a man, self-controlled, and with powers that verge upon the supernatural. In China the dragon, except as noted below, is not a power for evil, but a beneficent being producing rain and representing the fecundating principle in nature. He is the essence of the yang, or male, principle. “He controls the rain, and so holds in his power prosperity and peace.” Myths of the Waters, The Dragons, Myths and Legends of China, by Edward T.C. Werner, [1922], at sacred-texts.com

Early in my Wing Chun training, “Move like a Dragon” was an analogy my Sifu used to describe the evasive and forward, never retreating way in which a Wing Chun practitioner should forge an attack. This idea of forward motion, and constant pressure upon an opponent was fostered and cultivated in various ways every training session.

Changing direction to defuse an opponents oncoming force is one method to employ in an encounter where the oncoming force is strong and overcommitted. In these types of situations a combination of change of stance, hand technique and forward pressure can be utilized to weaken the attack and incapacitate you opponents ability to recover from his own attack.

Constant motion is inevitable in a real fight situation. There will be no staged or choreographed feed and responses from friendly training partners, there will be an ever changing enemy meaning real harm to you or your loved ones if you do not move, change and have answers to movements presented by your attacker/s. One solution, train to defuse oncoming force with change and movement, train to move and be unpredictable as possible.

Reading or perceiving signs, movements, gestures, and signals from an opponent, advancing with ferocity to intercept and thwart forward motion then trapping limbs to destroy an opponents structure and ability to attack is the goal. The methods we use and techniques we train within the Wing Chun system show us ways to achieve this.

A special thank you and Mahalo Nui Loa to Sifu’s John Divirgillio and Alan “Bak Fu” Vasquez for making the trip to Kailua Kona on the Big Island of Hawaii again this year for the two day Wing Chun Seminar held February 1 and 2nd 2014. It took me another two days to internalize what had been taught and another day to find the right way to describe the ideas shared by these two masters of Wing Chun Kuen, as well as other martial combat systems.

Day one focused on reflex and touch drills along with three dimensions of bridging and entry to control your opponent, then integration of these ideas within Chi Sao and other applications within the system.

The ideas came fast and more ferocious than some of the fist that were being thrown, so I took some time to write this, I wanted to ensure I had described what I had witnessed this past weekend thus the late posting.

The lunches were filled with good grinds and colorful story, and everyone present had Wing Chun overload by one hour into the first session.

I would like to give special Thanks and Mahalos to my Sifu Alan “Bak Fu” Vasquez for setting up this Seminar and hosting lunch by way of superior technique, as per usual… You had to be there! lol

Everyone whom attended had seen one of the foremost authority on Wing Chun Technique and its History doing what he does best. Thank you Sifu John Divirgillio we at Pacific Wing Chun Association look forward to your return to give us a refresher session on everything you shared this week. 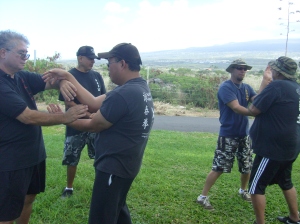 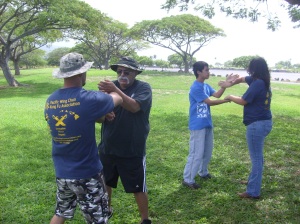 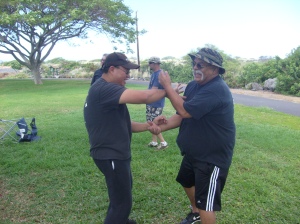 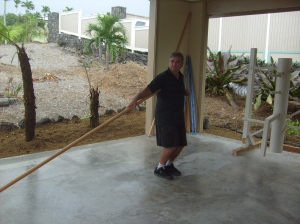 Saturday – Noon till 3pm. We will gather for an Association Dinner after the Seminar on Saturday.

Wing Chun Association Members from all Islands and Continential US are encouraged to attend. 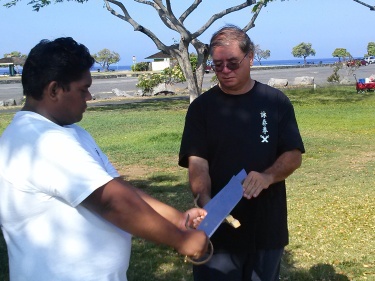 “You have just learned the two most important things about Wing Chun Kung Fu, Respect and Breathing!”  is what my Sifu said on day one.

This was taught in metaphorical fashion. I was told to stand in a modified attention stance and then it was called out;

Now lets look at this portion of the statement, “Respect and Breathing”, we all know what happens if we all stop breathing. Basically we die.

If we put two trained martial artists with the exact same skill set in a ring, the outcome would depend on will power and a little luck. Now lets add something to one of the fighters skill set; solid relaxed breath training, or training to breath appropriately for the circumstance. Breathing has a lot to do with how well your body does under pressure. If your blood is well oxygenated and the body is constantly being refreshed by breath and the fighter can achieve this well under pressure, this fighter has an skill that may well be the edge he needs to overcome his opponent whom may be gassed, or weak and fatigued.

Common training knowledge directly correlates breathing with well developed cardio fitness, and as we all know good cardio equals stamina and longevity in case of a fight. There are professional athletes in Hawaii training under water with no breath as a means to develop a stronger resistance to fatigue in the body under duress. The idea here is to train the body to work with less oxygen or utilize the remaining oxygen in the body efficiently or economically. This is a common training method for the new guard of big wave surfers here in Hawaii and free-divers around the world.

There are also hundreds of breathing apparatus on the market, being used in MMA and most pro sports training camps today. From old gas masks to high tech re-breathers and breath restrictors  they all have a similar concept in mind. Train the body to breath efficiently, or utilize oxygen better.

The idea of training breath or breathing to be second nature under duress or in a conflict is key. Along with all technique taught within the Wing Chun System breath and breathing is paramount.

One idea on how it is instilled within the system itself would point to the breathing done and practiced during hand forms. If a student actually practices, he will get this training as part of his twice daily ritual of preforming Sil Nim Tao and it will become second nature or a memory reflex.

Another way this can be incorporated into training method, is through forced instinctual breathing. As a student or practitioner works on technique, if coordinated strong sharp out breaths are used during the exercises, the body automatically re-breaths due to the natural instinct to breath in as the body is stressed and out of breath.

“You have just learned the two most important things about Wing Chun Kung Fu, Respect and Breathing, Because if you dont Breath you Die, and if you don’t show Respect you may also Die!”

On Day One! “Respect and Breathing” is what he said.