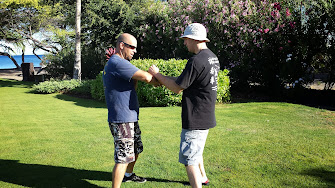 Pacific Wing Chun Association is honored by another visit from our Kung Brother Sifu Scott Cannam. His knowledge in the history of Wing Chun and the system in general is unmatched, it is always a treat to spend time rolling hands and sharing ideas and theory with him. Todays session was no different, as we began with san sik and then into flow drills Scott gave insight into theory and how to gain advantage over an opponent in structure and with proper technique. We then shared ideas on chi sao and intercepting.And at the end of class the group chased down the training mitts with kicks, and triple punches till everyone had a solid sweat on in the hot Kona sun. I am already looking forward to the next session later this week. Again welcome back and many thanks for sharing your Manao (knowledge in Hawaiian language) LRs Sifu Scott Cannam